Standard
The picnic got off to a little bit of a rough start.

Just as we were about to leave the neighbour yelled out over the fence and it turned out they’d been burgled. AGAIN. My husband had seen the burglar stroll down the driveway and just assumed he was a friend of theirs.  Oops. Bear in mind this was 4.30pm on a bright and sunny day on a busy main road. The audacity! They kicked in the back door and made a horrible mess 😦

Here’s hoping Karma was paying attention and these guys get what they deserve.

So by the time we made it out to the reserve at the back of the lake, a mere twenty minute journey, (after doing some vigilante driving around the back streets to see if my husband could recognise the burglar) the rest of my family were already there and had ‘bagsied’ a BBQ. Turns out they are free to use which was an added bonus, especially considering I had forgotten to get coins on the way out. 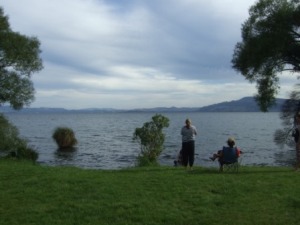 The view out over the Lake 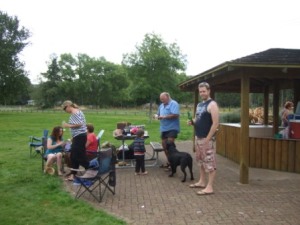 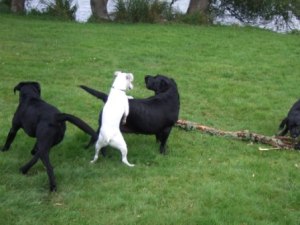 ...and er, attempting to mount things he shouldn't be mounting

The brave among us (no, not me, I said the brave) had a dip in the lake. My nephew enjoyed it so much he didn’t want to get out. My brother told him that when your skin starts getting all wrinkly and prune like, it’s time to get out of the water.

“Let’s have a look at your hands” my brother said. “I’m not cold!” my nephew protested, with quivering blue lips and hands shaking so much they were a blur.

The food was delicious. My brother and sister cooked, as I was busy taking photos and hugging my chubby little nephew.  Oh and drinking, but not at the same time as I was holding him of course. I’m a responsible aunty. Plus he tries to drink my wine and I’m not big on sharing.

Me & my gorgeous little chubby nephew

And my sister-in-law enjoying them!

All was good until Dad decided to forget he was in public and dropped his wet swimming shorts right there by the picnic table, giving us quite an eyeful. 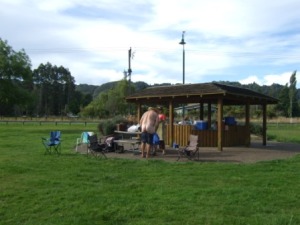 *mutters* you wouldn't see that kind of behaviour back home

The dogs spent many happy hours paddling in the lake, digging logs out of the bank. That is when they weren’t scrounging for food of course. Awww who could resist those eyes!

At one point they started swimming out towards a bunch of swans several hundred metres offshore. I was slightly alarmed that they might just keep going. My father wasn’t.

“Pick you up on the other side!” he called.

Oh please can I have some! I haven't been fed since last week!

My mother happily pottered around with her grandchildren, picking daisies and doing whatever it is that Nanny’s do. She helped to feed the little one, even putting down her gin to do so. At one point my sister-in-law got distracted and tried to shove the spoon in my mother’s mouth.

It was a wonderful afternoon, with lots of laughs, great food and plenty of wine. And how hard was it to organise? Not hard at all! In fact, it was super easy peasy. If you like spending time with all your extended loved ones I recommend it. Or even if you don’t, just go with a friend instead.

As we drove home, with a happy hubby and a tired doggy…

I want my bed

I reflected on the afternoon and realised I was feeling very contented and refreshed. My family may be chaotic sometimes but I adore every one of them and if there’s nothing else that Nathan’s passing taught me last year it was to spend as much time as you posibly can with the people you love.

I declare the picnic as one of Life’s Simple Pleasures, and I’m still smiling now when I think of it, although with a slight ringing in the ears as my sister-in-law slapped me hard across the cheek as we were leaving because ‘apparently’ there was a mosquito on my face. My brother said it looked like she enjoyed doing it. Hmm, did I forget her last birthday?

I’ll leave you with a picture of the beautiful sky just as we were leaving….

The end of a perfect afternoon

Have a great week everyone! I will let you know soon what next weekend’s Simple Pleasure will be. Oh and don’t forget to ‘Follow’ my journey! 🙂