I was a little bit apprehensive this morning when I took my first bite of toast, with sticky-pink-rose-petal jam smeared all over it… 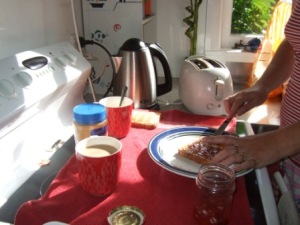 …but it tasted just like strawberry jam.  Except for when you got a clump of rose petals and then it tasted like, funnily enough, rose petals.

I conclude that as the only thing my rose petal jam and a store bought strawberry/raspberry jam have in common is bucketloads of sugar, jam therefore tastes like sugar.

The only rose bush in my garden is a creamy white one, so as the recipe suggested pale pink or red we set off on a bike ride around town to pilfer what we could find. We went to the Linton Rose park first but inconveniently there was a bridal party having their pictures taken. So we went to the Government Gardens where we struck gold

I adore my bike! Cream and Cherry coloured with a basket and bell

I probably went a bit overboard. The recipe called for 2 cups of rose petals, so I half filled a shopping bag and hoped for the best.

First you cut off the white bit at the bottom of the petal as apparently it tastes quite bitter. 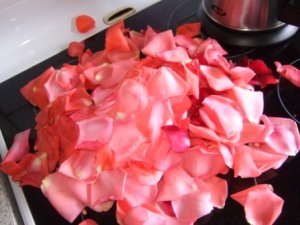 After then cleaning them delicately in water, you put them in a bowl and add 200 grams of castor sugar and the juice of one lemon

After that you ‘massage’ the petals,  slightly bruising them, and the lemon and sugar will draw out the fragrance and colour. Ideally (I neglected to read this bit earlier) you let them sit in the refrigerator overnight, but a few hours is also fine. So we took a break and went out to the blue lake so the dog and hubby could have a swim.

The Blue Lake (Next door is The Green Lake). It's true I promise.

Then it was back home to dissolve 400 grams of sugar in 600ml of water,  add the rose petal mixture and let it bubble and boil for 20 minutes or so. I added a sachet of jam setting mix and poured it into sterilised jars and viola! 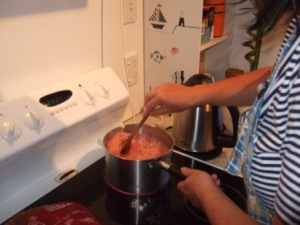 Do I think they’ll eat it? No. probably not. Although I hope they’ll at least try some.

Would I cook it again? Nope. Not Rose Petal Jam anyway. It’s just a little too weird for me, even though it tasted ok. I did find a recipe for Chilli Jam though and I’m keen to try that. I’ve always been more of a savoury rather than sweet girl 🙂

I’m still going to make the Lavender cupcakes either later today or tomorrow (We have a three day weekend here in NZ! Woohoo!)

At the moment the lavender flowers are infusing milk out in the fridge. Again, the recipe (which I’ve only just read properly) recommends leaving this overnight.

So I might do some writing or the painting I’ve been planning for above the pantry while the milk and flowers do their stuff.

I hope you’re all having wonderful weekends wherever you are 🙂

Error: Twitter did not respond. Please wait a few minutes and refresh this page.