I sat down the other day to read through the book again, something I hadn’t done in the last few months (since the arrival of the gorgeous little life force that is Holly in our lives), and I was amazed to realise that some of the things that I tried for the first time last year as part of this blog, I now do frequently as just a normal part of my life. And that realisation delighted me. That, if nothing else, this blog broadened my horizons and led to me doing simple things such as enjoying the sunset, baking bread and beachcombing. These kinds of activities are now just an everyday part of my life, rather than a special occasion. But this doesn’t mean that I now take them for granted because I don’t. Not at all. I still appreciate every single moment of the sunset, a chance to reflect on the day and recharge my soul.

We’ve grown a lot of our own produce this summer. I must admit (because he will read this and call me out if I lie about it dammit) that hubby still does the majority (ok, all) of the work in the garden. But I get to enjoy the fruits of his labour! we’ve had potatoes, corn, the sweetest cherry tomatoes, strawberries, blueberries, celery, lettuce, pumpkin…and probably other stuff I’m forgetting. I do have plans to start my own little raised gardens near the house (after hubby builds them) and I would like to grow lots of vegies to sustain us through Winter, especially important now that we are down to one income.

And baking bread, well that’s just fun and so easy! But it’s something I once would never have attempted. In fact my neighbour expressed huge surprise when she asked me for a walk the other day and I couldn’t as I was in the middle of waiting for my dough to rise. She thought baking bread was a difficult and time consuming task but it’s actually really rewarding, and kneading dough is hugely satisfying. It’s a great time to just let your thoughts drift. I made rosemary bread this time, and we ate it with tomato soup on Sunday night and it was delicious hmm….

Here’s a before and after shot of the loaves

I’m also working on a new art/craft project. It’s difficult to explain at this point what the finished project will look like (at least in my head!) so you’ll just have to bear with me as I slowly reveal it, but here’s how it’s going so far.. 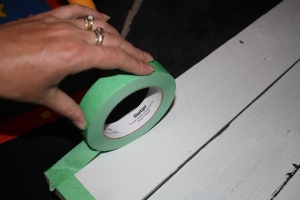 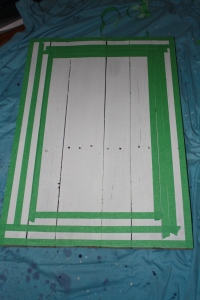 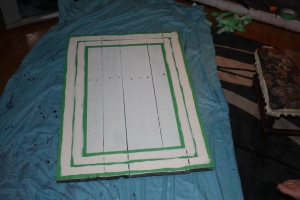 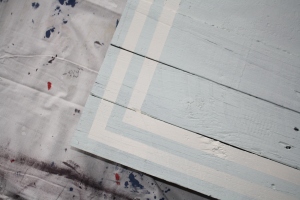 Oh and I made a cake the other day! Only the second one I’ve ever made 🙂 First one was a total disaster and only fit for the dog’s consumption, but this one was much better. Banana and I threw a few blueberries from the garden in. Yum! 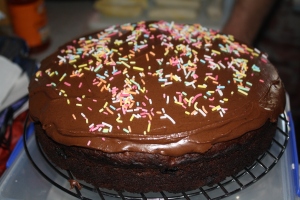 And last but not least, my much longed for little baby girl is now nearly 4 and a half months old already. We’ve just started her on some solids (if you can call pureed fruits and vege ‘solid’) and she is loving them. Here’s a pic of us ♥

The love of my life ♥

Her name was Kathryn, and she was the most kind, caring, vivacious, funny, positive, inspiring, caring, talented woman I have ever met. She was a huge support to me over the years, both through my writing and also my fertility issues. Those of you who have read the ‘About’ page of this blog when I started it a year ago will realise she was the friend I talked about who survived her brush with cancer. Well last year it came back, and this time she wasn’t so lucky. She leaves behind her husband and an eight year old daughter.

It’s made me really think about life again. Originally when I started this blog it was just to be for the year. Of course when I started it I didn’t know I was going to get pregnant a month later (dream finally come true!) so I didn’t as have much energy to devote to this as I had hoped. I had a blast doing the things I did though, and I really do feel like I reclaimed some of life’s little pleasures, whether it was making jam, going for bike rides, sleeping under the stars or studying the flowers in the back garden with a microscope.

In honour of Kathryn, I’m going to carry it on for this year. Of course I now have a 15 week old baby daughter, who is VERY time demanding, and already quite the little dramatic personality (we are going to be in soooooooooo much trouble as she gets older).  So I’m going to go into it a little easier on myself this year and not have the pressure of doing something every weekend, although I will certainly try as much as possible.

Thanks for sticking round guys, and here’s to another fun year 🙂 I leave you with a recent sunset, humbling in its beauty. 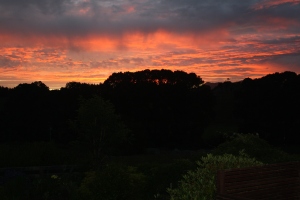 So today I decided to see what I could create with the fruits of my beach labour yesterday. I’d seen a driftwood mirror on the internet that I wanted to give a try, plus I found a cute little magazine rack at the local Red Cross shop for $5 that just needed to be jazzed up a little to fit into my house. END_OF_DOCUMENT_TOKEN_TO_BE_REPLACED

That’s the plan anyway. It all depends on the weather. Right now outside my window it’s dark grey and gloomy and the rain has been falling steadily all day. Working at a primary school this means big puddles and muddy fields which are, of course, children’s adventure playgrounds. Hence lots of grubby but happy children needing clean underwear and shorts. Sigh

The long range weather forecast for the weekend is looking a little grim but hey, as we all know, weather forecasts are hardly ever right.  END_OF_DOCUMENT_TOKEN_TO_BE_REPLACED